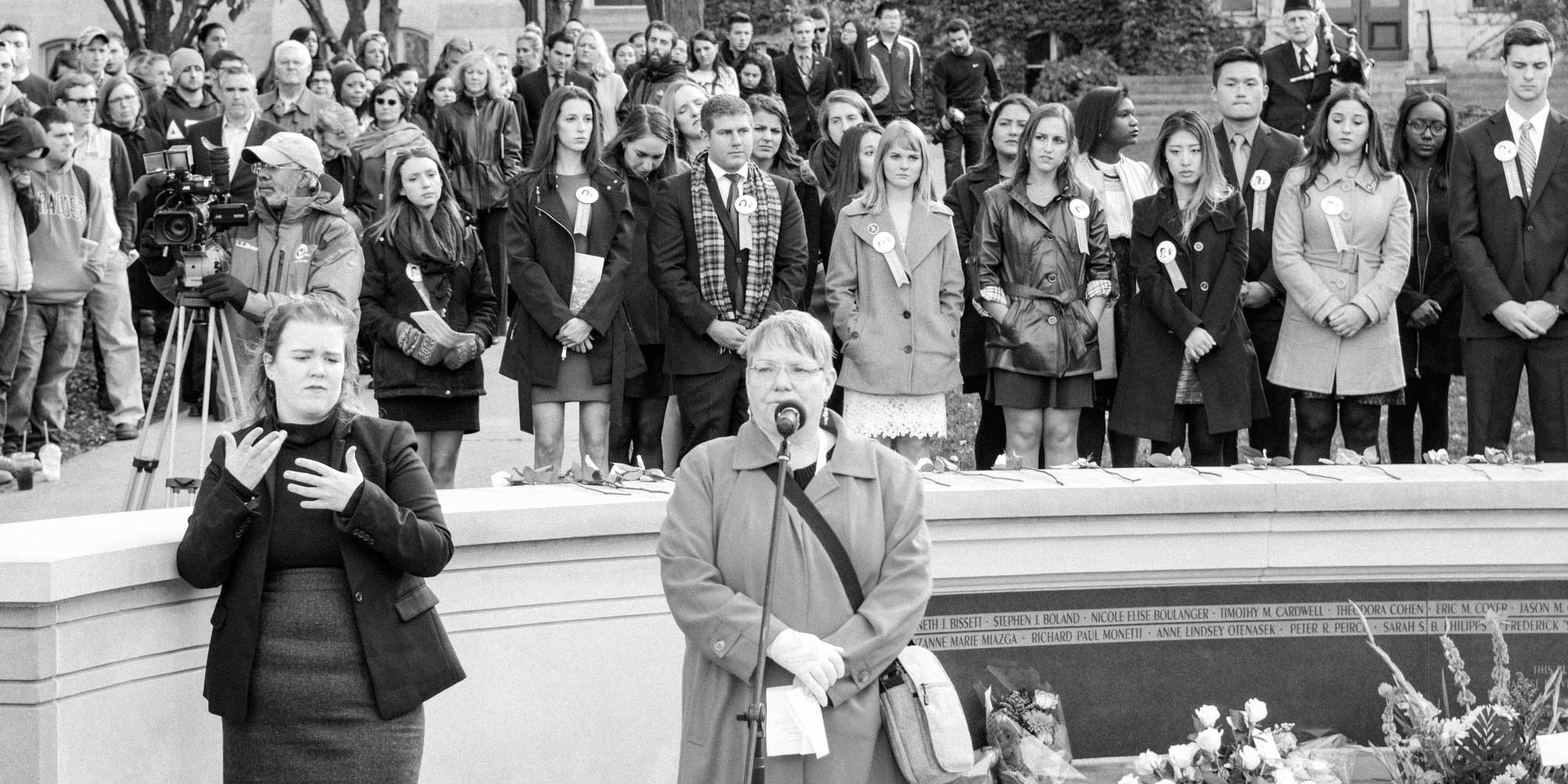 This week marks the beginning of the fall term st Syracuse University, and the 37 Lockerbie and Remembrance Scholars will soon gather to begin planning events for Remembrance Week, which is scheduled for October 23-29. They follow in the footsteps of hundreds of their predecessors dating back to the inception of Remembrance Week in the early 1990s.

Something will be very different this year, however: Ed Galvin and Judy O’Rourke, stalwarts in the Pan Am 103 family for decades, both retired last fall. I met Ed, then the director of records and archives management, for the first during the 2013 Remembrance Week. I had started this site the previous August as a finite project with a definitive ending, but that changed when I learned that portions of the Pan Am 103 archives would be open to the public during Remembrance Week. Ed was instrumental in creating and expanding the Pan Am 103 archives over the years; he also oversaw the creation of a position for a full-time archivist who would be dedicated exclusively to the Pan Am 103 collection, and this work played a key role in the site’s evolution.

As 2013 marked the 25th anniversary of the tragedy, I had relatively little time to speak to Ed or Cara Howe, the first Pan Am 103 archivist, but I was fortunate enough to speak to him more extensively in 2014 and last year, when I learned of his impending retirement.

Ed had no direct connection to the tragedy when he came to Syracuse in 1995, but as he poured over the materials in the archives and met the families and friends of the passengers, the power of the stories drew him in. As he recounts in a letter announcing his retirement to the members of Victims of Pan Am Flight 103, “Pan Am 103 has touched me, and as you all know, once touched it is forever.”

I can personally attest to the power and truth of this statement. Judy O’Rourke at the Rose-Laying Ceremony at Syracuse University, October 30, 2015.

Judy O’Rourke worked at Syracuse University for 34 years, serving as the co-director of the Center for Fellowship and Scholarship Advising in her last years to the college. She was a driving force behind Remembrance Week, and like Ed, who serves on VPAF’s Board of Directors, Judy’s involvement in the Pan Am 103 legacy extended beyond the campus. As the facilitator of the Lockerbie Scholarships, she played an important role in developing and strengthening a bond between 2 communities touched by tragedy. Such was the significance of her dedication that in 2013, she received an Order of the British Empire honor for her work with the Lockerbie Scholars.

Judy and I first met during Remembrance Week in 2014, though I’d previously contacted her regarding photos or TruthQuest. She was a constant presence at the week’s many functions, and I was repeatedly struck by the close bond she shared with the Lockerbie and Remembrance Scholars.

Ed and Judy both remain active in the Victims of Pan Am 103 organization; as mentioned above, Ed serves on the group’s advisory board of directors, and Judy serves as VPAF’s recording secretary and TruthQuest Editor.

Last year, The Daily Orange posted this tribute to Judy and Ed, and this seems to be an appropriate way for me to end this brief post dedicated to 2 people who have done so much for those touched by the legacy of those lost on December 21, 1988, and I would add that without the archives and Remembrance Week, Remembering Karen would never have come to fruition.