Vast and intense, the storm would arrive in Syracuse shortly before the service began. If I dreaded the thought of gathering at the Place of Remembrance in the rain, the inclement weather in Syracuse reminded me of a different time and place.

December 21, 1988 had been an unseasonably warm and dry day in Upstate New York. Three thousand miles away, dozens of people made their way through London’s rain to Heathrow airport. They passed through Pan Am’s terminal, checked their bags, and boarded a worn 747 named “Clipper Maid of the Seas.” The flight was scheduled to land at JFK around 9:30.

The passengers included families, business people, soldiers, and dozens of college students returning from their studies overseas. Thirty five had studied abroad through Syracuse University. Most of them had been in London. Though many probably cursed the dreary weather, the drizzle couldn’t lessen the palpable excitement of those on the plane. They’d be back in the states in a matter of hours; most would be home by midnight.

It was also raining in the tiny village of Lockerbie. Three hundred miles north-west of London and just over the Scottish border, the town was noted for its sheep farms and rolling countryside. As the light of the shortest day of the year faded, residents watched television or wrapped presents. Three days of rain had softened the ground, but this was of little concern to most of the residents who like the passengers on Pan Am Flight 103, had no reason to expect anything beyond the ordinary that evening.

The campus that bustled with students in October was nearly empty when Traci and I parked near the library. If I was only vaguely aware that I was walking in the footsteps of the students of ’88 during Remembrance Week, the reverberations of history were deafening on the 25th anniversary of their deaths. 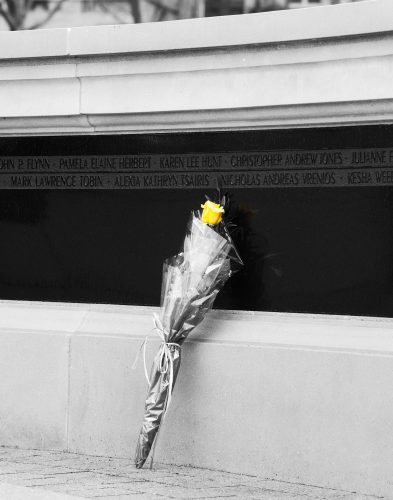 A yellow rose, Karen Hunt’s favorite flower, at the Wall of Remembrance.

My trip to Remembrance Week was planned weeks in advance; our latest visit to Syracuse was more spontaneous but less ambitious. We were spending Christmas with my parents in Honeoye and sisters in Webster, so it wasn’t taxing for us to tack on a couple of days and a few hundred miles.

Remembrance Week was remarkable, so much so that I felt compelled to attend one of the formal memorial services on December 21. Services were scheduled to be held in London, New York City, Lockerbie, New York, Washington DC, and Syracuse. The service in Washington would be among the largest and for us, closest of the ceremonies, but Syracuse’s close proximity to the Rochester area settled the question.

We left the hotel under leaden skies that hinted at the storm to come. I had my usual assortment of camera gear with me. We also had a yellow rose, Karen Lee Hunt’s favorite flower, which I hoped to place near her name on the wall. I hoped to capture an image similar to one I had taken 2 months ago. Unfortunately, the rain began to fall in sheets before we got to campus.

I was just about to scrap the idea when the rain stopped momentarily. We scrambled to up to the Place of Remembrance to take the shots before the rain began to fall again. Such an image captured on the 25th anniversary meant a great deal to me, but recent events had rendered the shot even more meaningful.

On a whim, Traci and I decided to walk to Mount Olympus. The covered stairs snaked up the hillside in an almost haphazard fashion. The entrance looked menacing in the haze.

Traci counted 117 steps to the summit of the hill. She had a chance to verify the count sooner than we’d planned as the storm whipped up again, driving us from the exposed hilltop into what shelter the covered steps could provide.

I’d glanced at my watch periodically all day, and I noted the most recent time: 1:05pm.

Twenty five years earlier, Pan American Flight 103 had just left the terminal to join the queue of aircraft waiting to take off from Runway 27R. The 747 took to the air at 6:25pm, London time.

Ascending to 31,000 feet, the aircraft flew north toward the Scottish border. 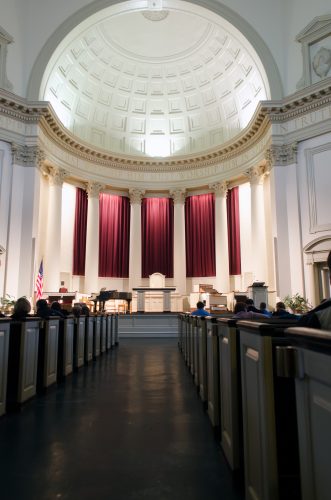 The interior of Hendricks Chapel before the ceremony.

The storm diminishes a bit, which is to say that we’d have to deal with heavy rain rather than the wind-swept torrent that trapped us under the narrow roof under the stairs. Dodging puddles, Traci and I trotted to Hendricks Chapel through the rain.

Based on images of past services, I anticipated a few dozen people at the ceremony. Though Hendricks was hardly full, it was readily apparent that there were far more here when we entered the chapel. Journalists milled about, conducting interviews or positioning themselves with still cameras while the families, friends, and descendants of victims gradually filled the pews. The journalists were young—not much older than the students who boarded the plane in Heathrow in 1988. One asked me for an interview. Too polite to say no, I told him that I have no direct connection with any of the victims, and I was a bit surprised when he beckoned me to the gallery.

Keyed up by the emotion of the day and focused by my recent work on the website, I overcame my camera shyness during the interview. This was but the latest in a string of unusual occurrences dating back to May. With so many relatives and friends present, I was also quite confident that the interview would never make it past an editor. The interview ended in a few minutes (much to my chagrin, the local cable station ran significant portions of the interview that evening).

With the interview over, I had enough time to reflect on all of this, on the young woman who drew me into this story so many years ago, and on the string of events and wealth of information that pulled my sense of connection with those on Pan Am 103 out of its long dormancy. I’d always commemorated the bombing of Pan Am 103 every December 21 with a moment of silence at 2:03 p.m., the moment the plane and its 259 passengers began the long plummet to the fields and streets of Lockerbie, Scotland. I never envisioned myself sitting on the campus of the university that lost so many students, people who were so much like myself in 1988, yet here I was in the heart of the school that was once home to the young woman who opened my eyes in inconceivable ways 25 years ago.

At 6:58pm, Captain Jim MacQuarrie contacted the air traffic control center in Prestwick. The center would shortly relay permission to begin an oceanic crossing over the Atlantic. At 7:02:50, the lights went out.

Minutes later, 11 people in Lockerbie joined them. In a nightmarish instant, the tiny, unassuming village was suddenly thrust on to the world stage.

Traci drew a little closer as we hit 2:03. If the expression on my face reflected the smallest portion of my emotions, she would know what I felt at that moment.

The chapel fell silent for a minute before the ceremony began with the Common Prayer for Peace. Each speaker, each prayer, each piece of music added to the tapestry of emotion and memory swirling through the chapel in Syracuse, in London, in Lockerbie. The quilt, with its names, photographs, and scraps of clothing sat to the left of the stage; it was a concrete link to their past—and somehow, to my own. Most of the mourners sat in silence, though an occasional sob wafted through the chapel. Emotions ran strong, even if a quarter of a century had passed. 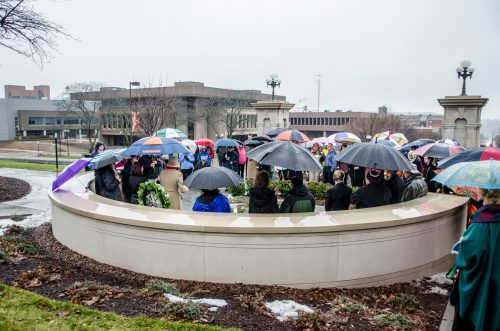 Mourners gather at the Place of Remembrance on 21 December, 2013.

Crouse Tower’s chimes tolled 35 times as over 100 of us filtered through the cold, persistent rain to the Place of Remembrance for some final words and the placing of flowers. There wouldn’t be many photographs this time, but we were not here as observers. Traci and I joined the others in placing white flowers on the pine boughs covering the circular center of the memorial.

This could have been the dénouement of the story that began on December 21, 1988, the culmination of an intermittent search for answers that had spanned 25 years. Yet I knew that it isn’t the end of the narrative, but a chapter in a growing volume. Something else had come up, something remarkable, exciting, and unnerving. It had the potential to change everything I knew about the life of Karen Lee Hunt. It was a new beginning, and it would happen in less than a week.