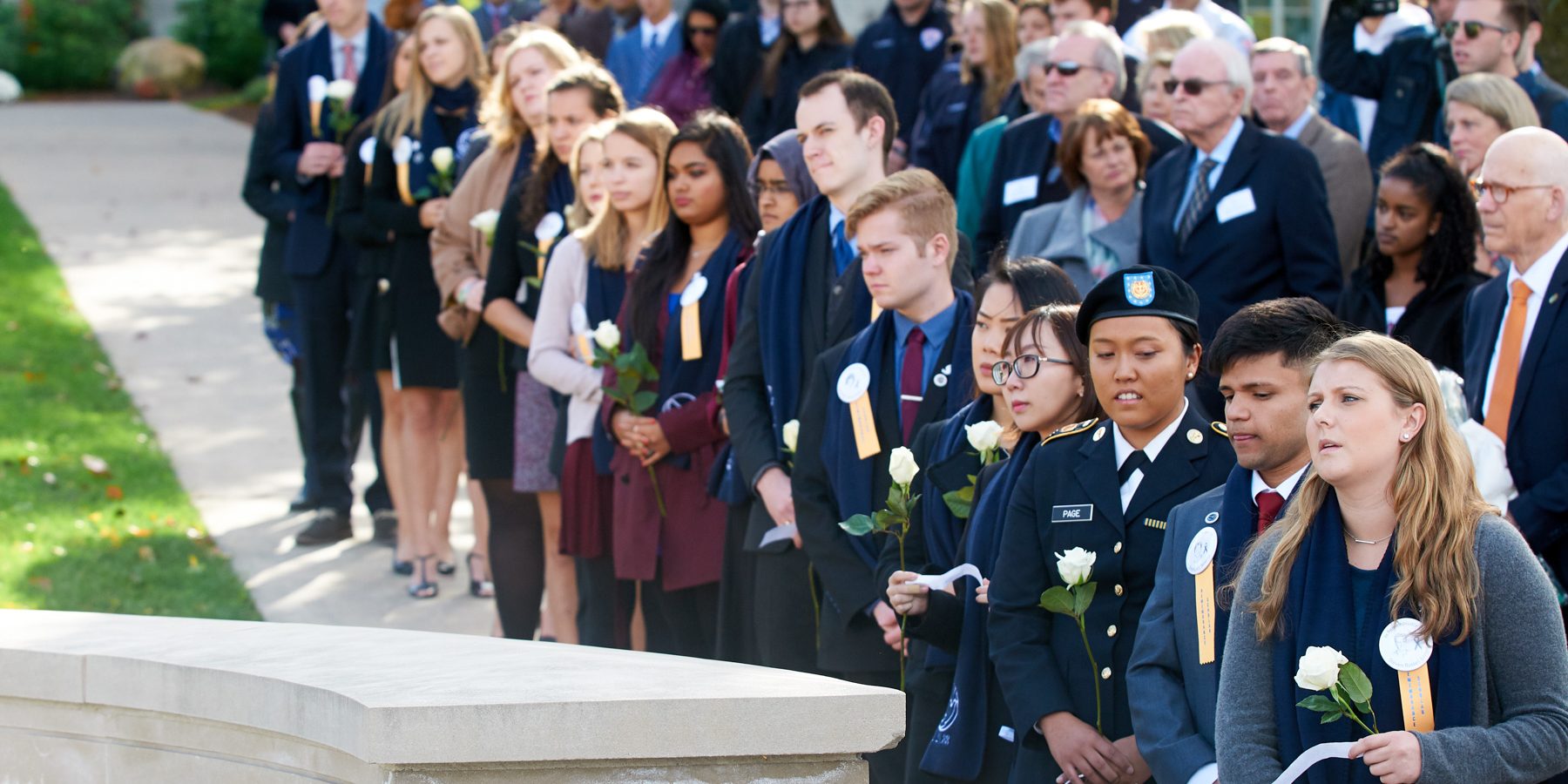 Twenty Eighteen marks the thirtieth anniversary of the bombing of Pan Am Flight 103, and there has been a flurry of activity over the past few weeks as families and friends make plans to commemorate the anniversary on December 21.

This year’s Remembrance Week begins with the candlelight service this coming Sunday. The full list of activities, as listed on Syracuse University’s website, appears at the end of this post.

Five cyclists are currently in transit from Lockerbie to Syracuse. The cyclists include Colin Dorrance, who witnessed the crash when he was an eighteen-year old police office in Lockerbie.

Peter Lowenstein, father of Alexander Lowenstein, died this past May. I’ve written several posts about Dark Elegy, the collection of statues the Lowensteins created in the years after the tragedy. The family was profiled in a Post Standard article five years ago.

Sunday, Oct. 28—A candlelight vigil will begin at Hendricks Chapel at 7 p.m., as part of the chapel’s weekly Dean’s Convocation, and proceed to the Wall of Remembrance, where the names of the 35 SU student victims will be read. American Sign Language (ASL) interpretation will be provided.

Monday, Oct. 29
A panel discussion on “Overcoming the Traumas of Terrorism,” moderated by Karen Hall, assistant director of civic engagement and academic advising for the Renée Crown University Honors Program, will be held at 6 p.m. in 214 Slocum Hall. American Sign Language (ASL) interpretation will be provided.

Tuesday, Oct. 30—The Remembrance and Lockerbie Scholars host 30 minutes of meditation at the Hendricks Chapel Noble Room at 10 a.m.

“A Conversation with James Kreindler,” sponsored by the Syracuse University Libraries and the College of Law. Melanie Gray Ceremonial Courtroom, Dineen Hall, College of Law, 4 p.m. Communication Access Realtime Translation (CART) will be provided. Kreindler was the architect of the $2.7 billion settlement against the Libyan government on behalf of the families of the victims.

Wednesday, Oct. 31—Remembrance and Lockerbie Scholars will tie commemorative  ribbons on trees in the Orange Grove, 10 a.m. to 3 p.m.

“A Celebration of Life Open Mic Night,” honoring the Pan Am 103 victims through the artistic talents of current scholars and students, will begin at 7 p.m. in the Panasci Lounge in the Schine Student Center. Doors open at 7 p.m.; event begins at 7:30 p.m.

Friday, Nov. 2
The Annual Rose-Laying Ceremony, to remember the Syracuse students killed in the Pan Am 103 bombing, will be held at 2:03 p.m. at the Place of Remembrance, located in front of the Hall of Languages. American Sign Language (ASL) interpretation will be provided.

The Remembrance Convocation, honoring the 2018-19 Remembrance and Lockerbie Scholars, will be held at 3 p.m. in Hendricks Chapel. American Sign Language (ASL) interpretation and Communication Access Realtime Translation (CART) will be provided. A reception will follow in the lobby of the Heroy Geology Laboratory.

Rose-laying ceremonies will happen at the University’s study abroad centers around the world during Remembrance Week. Additionally, members of the University community will wear commemorative buttons honoring all 270 victims of the tragedy during the Syracuse rose-laying and Remembrance convocation activities.