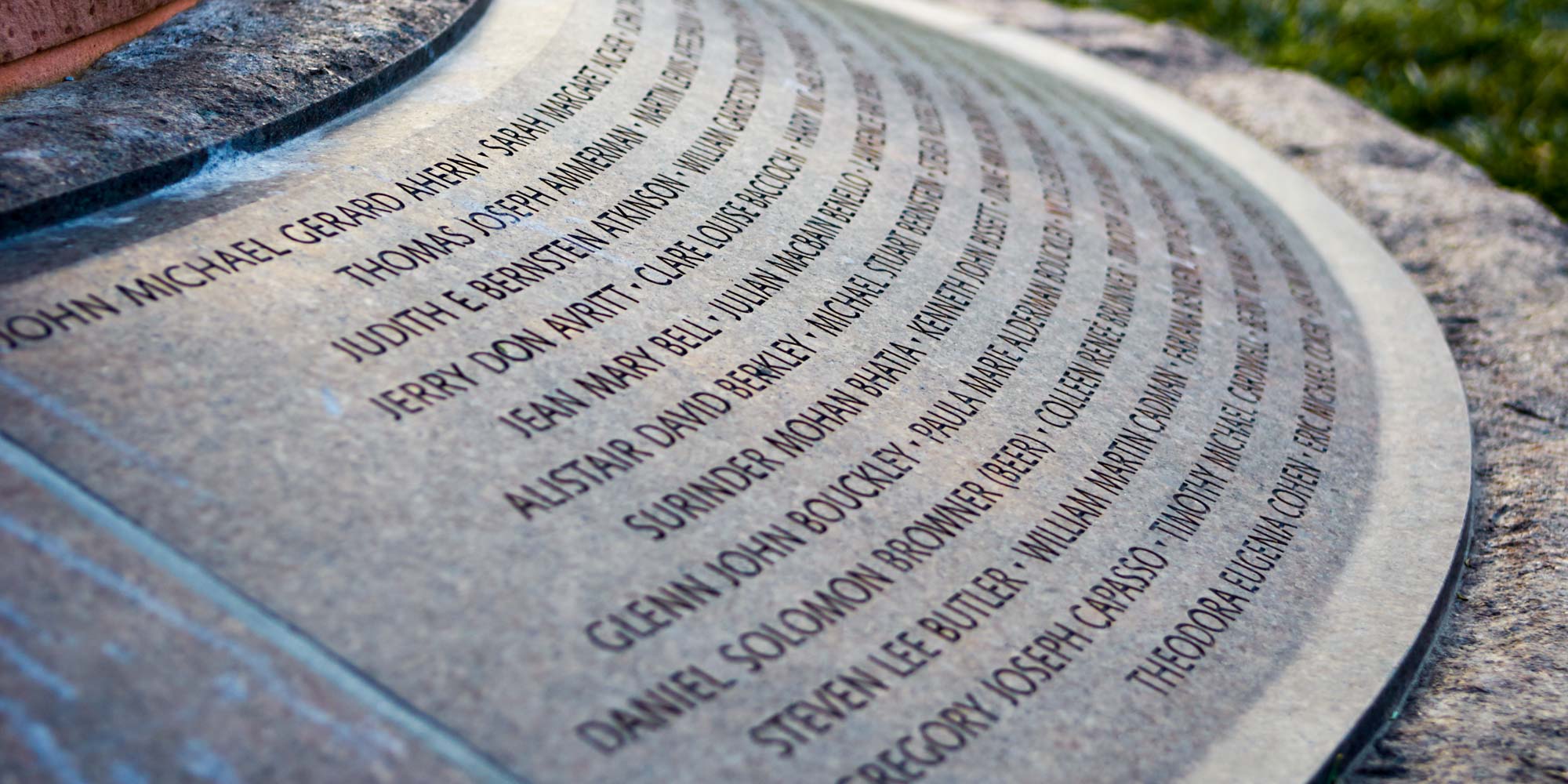 Though I was unable to make it to Arlington on the 27th anniversary last December, I can share portions of this speech courtesy of Victims of Pan Am Flight 103, which posted a number of speeches from last year’s memorial service on their Facebook site. The following excerpts are from Ken Dornstein’s presentation, the full text of which is here. Dornstein’s investigation, chronicled in a 3 part documentary that aired on PBS’s Frontline last year, brought Pan Am 103 back into the news and reinvigorated a 27-year-old investigation of the bombing:

I have to confess that one of the most gratifying aspects of the airing of my film has been the spotlight that is now being put on one of the most mysterious figures in the bombing—a man who has been almost my singular focus for the last four years.

If you had Googled this man’s name just a few months ago, you would have gotten almost no hits. Now there are thousands of stories that mention his name as the man who likely connected the wires on the bomb that blew up Flight 103.

If you had looked through all of the evidence gathered by the Scottish and American investigators in the Lockerbie case, you would have found not a single photograph of this man. Now his picture has been circulated around the world.

The man’s name is Abuajila Mas’ud, and I believe he is one of the few people left alive who can answer the remaining questions about Lockerbie: Where did the components for the device come from? Who helped assemble it and get onto Flight 103? Were elements of any other group or state involved?

It’s because this man could potentially be so valuable that the Libyans always denied he existed. When Scottish investigators came to Libya to interview potential witnesses, they were told they had no information about Mas’ud, even when given a passport number he was using in 1988. The same thing happened when German investigators came to Tripoli to ask about Mas’ud in connection with the 1986 bombing of the La Belle disco in Berlin that killed several American soldiers. A Libyan participant in that attack testified that Mas’ud was the bomb expert in that case, but the Libyans said they’d never heard of him.

Abdel Baset al Megrahi was asked many times about Mas’ud because records indicated that the convicted Lockerbie bomber had traveled with Mas’ud on several occasions in Malta before the bombing, including the morning of the 21st, when he just happened to board the same flight as Megrahi from Malta back to Tripoli, presumably after helping to arm the bomb that would blow up Flight 103 later that night. Megrahi, of course, denied any knowledge of Mas’ud, and his defenders continue to claim that Megrahi’s connections to Mas’ud in the run up to the bombing are sheer coincidence. But I think the facts say otherwise.

Even members of Megrahi’s original defense team, in statements they made to the Scottish Criminal Cases Review Commission, said that they were suspicious about Megrahi’s relationship with Mas’ud. “The key to the case is Abuajila Mas’ud,” one of Megrahi’s lawyers testified. “I had come to the conclusion that Mas’ud may have been involved, and I tried to broach this gently with [Megrahi], but he would not have anything to do with the suggestion that any Libyan was involved.”

So Mas’ud slipped through the net. He was the one of the key suspects who got away. That is, until now.

Despite decades of denials by the Libyans, we now know that Mas’ud exists… and he’s alive and well in a Libyan prison. It turned out that Mas’ud, long suspected in several high-profile bombings against the West in the 1980s, was still making bombs in 2011, when he was caught attempting to boobytrap the cars of people trying to topple the Qaddafi regime. Mas’ud was likely captured in late 2011 or early 2012 and has been held by the Tripoli government ever since.

This past summer Mas’ud was sentenced to 10 years for his bombmaking activities. News reports that followed the broadcast of my FRONTLINE series suggest that the Scottish authorities have now reached out to question Mas’ud directly about Lockerbie. But unfortunately there has been no movement on this request so far.

Ken concludes with a powerful reminder of just how horrific, and relevant, the bombing of Pan Am 103 remains today, nearly 3 decades later:

I’ll close with one more personal reflection: A few weeks ago I was looking through my Lockerbie papers in preparation for donating them to the archive at Syracuse University. I came across an envelope from Scotland that I didn’t recognize. It had been sent to my father in the months after the bombing. It was photograph of my brother David’s body, laying as it fell in the backyard of Ella Ramsden’s house in Lockerbie. Over the years, I think I had maintained a false image in my mind of David having fallen intact—the whole person I knew and loved, fully clothed, maybe still strapped to his seat holding a book that he was no doubt reading at the time of the explosion. But this is not at all what I saw. And the revulsion I felt at that image reminded me that the bombing of Flight 103 was an act of murder on a massive scale, a true horror perpetrated against 270 innocent people. And this basic fact should never be lost over the decades its taken to achieve full justice.